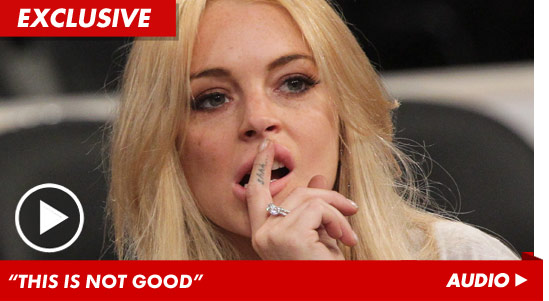 Lindsay Lohan completely wigged after some jackass stole her purse in Hawaii this weekend– telling friends, she was terrified the ordeal would land her in jail … and TMZ has obtained audio of her expletive-filled freak out.

Take a listen … moments after Lindsay discovered her bag was missing … she says, ”I
will f**king kill someone if I even have to get questioned [inaudible]
jail for a year.”

Lindsay was petrified she’d be stranded in Hawaii without her ID — forcing her to miss her court date in L.A. Wednesday morning … a misstep that could have potentially gotten her probation revoked, and landed her butt behind bars.

On tape Lindsay adds, “My dad will kill me” — interesting considering her on-again-off-again relationship with Michael Lohan … and his own in-and-out-of-jail (currently, out) status.

TMZ
Lindsay Lohan Freaks Out Over Stolen Purse — I Better Not Go to Jail Over This! [AUDIO]