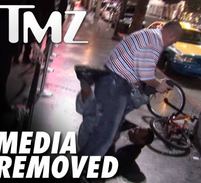 Here it is … PROOF Lindsay Lohan can still act … because the actress hit the beach like she didn’t have a care in the world Sunday … hours after someone jacked $10k out of her purse.

With her Playboy spread officially released online, Lohan showed off her physique in a tiny bikini … that couldn’t quite tame her breasts.

TMZ broke the story … Lohan freaked out Saturday night when her purse went missing at a house party … a purse which contained her ID, passport and $10k in cash.

The purse was eventually returned … minus the money.  Would you be smiling?