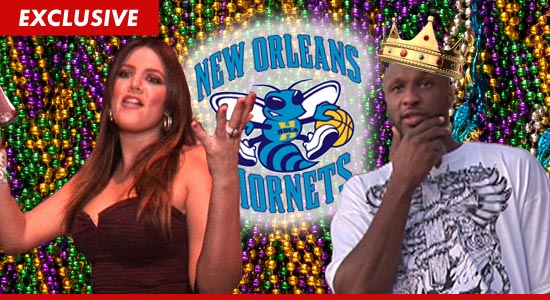 Khloe Kardashian is already preparing herself in case Lamar Odom gets traded out of Los Angeles … and a source close to the family tells TMZ she’s open to moving out of L.A. to be with her hubby.

Odom was supposed to be involved in a blockbuster trade for Chris Paul … but the deal fell through late Thursday night. Still, there’s still a chance L.O. could still be headed out of L.A. sometime soon.

We’re told Khloe would follow Lamar anywhere … but she would feel especially comfortable in New Orleans because the family spent TONS of time there when Kim was dating former Saints running back Reggie Bush … and she already has a bunch of friends who live in town.

As for Khloe’s reality TV career — it seems she’d find a way to keep it going no matter where she and Lam Lam end up  — one source close to the family put it, “If only Reggie would have stayed in New Orleans … it could have been Kim and Khloe take New Orleans.”

TMZ
Khloe Kardashian — Down to Relocate If Lamar Odom Gets Traded