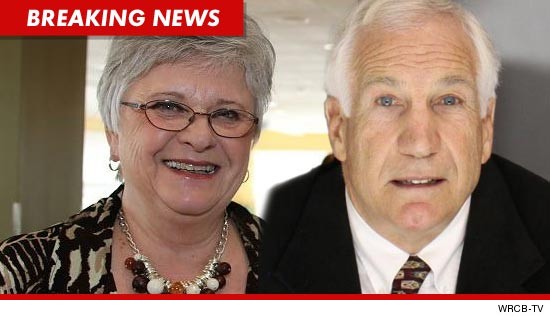 Jerry Sandusky‘s wife is standing behind her man … claiming he NEVER raped any boys and insists all of his accusers are making up their stories.

For the first time since the allegations went public, Dottie Sandusky has released a statement through her husband’s lawyer … claiming she never witnessed Jerry sexually abusing anyone … and doesn’t believe any of the allegations.

In her statement Dottie says she’s been “shocked and dismayed by the allegations made against Jerry.”

She adds, “As the mother of six children, I have been devastated by these accusations. “

“Our children, our extended family and friends know how much Jerry and I
love kids and have always tried to help and care for them. We would
never do anything to hurt them. I am so sad anyone would make such a
terrible accusation which is absolutely untrue. We don’t know why these
young men have made these false accusations, but we want everyone to
know they are untrue.”

As we previously reported, Dottie helped bail her husband out of jail this morning after he was arrested on suspicion of sexually abusing two more young boys.