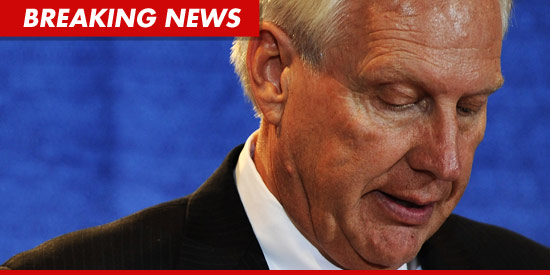 More disturbing allegations in the Jerry Sandusky scandal — now, a 30-year-old man has filed a lawsuit against the former Penn St. coach for sexually abusing him more than 100 times when he was a kid.

The accuser — who is only being identified as ‘John Doe’ — is NOT one of the 8 victims listed in the grand jury report that rocked Penn State — but his story seems to fall in line with the rest of the allegations.

According to John Doe’s lawyers, the alleged victim claims he met Sandusky through the Second Mile charity when he was 10-years-old … and was abused by the coach more than 100 times between 1992 and 1996.

Doe claims the abuse occurred in multiple locations — including the Penn State locker room, the Sandusky home, and also during a road trip to a bowl game.

8:30 AM PST — The accuser has released a statement about the suit … saying, “I don’t want other kids to be hurt and abused by Jerry Sandusky or anybody like Penn State to allow people like him to do it—rape kids!”

He adds, “I never told anybody what he did to me over 100 times at all kinds of places until the newspapers reported that he had abused other kids and the people at Penn State and Second Mile didn’t do the things they should have to protect me and the other kids.”

John Doe says he hopes his lawsuit will encourage other victims to come forward and “get help and help protect others in the future.”