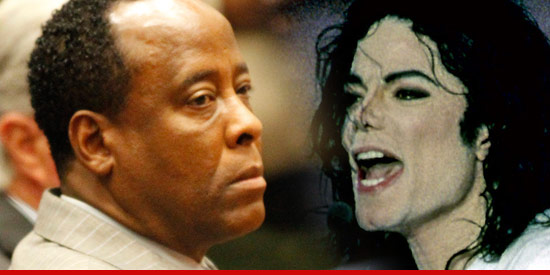 Judges, prosecutors and criminal lawyers who have spoken with TMZ agree … Conrad Murray should not get the maximum sentence — 4 years in prison — but the fact that he killed Michael Jackson changes everything.

The people we spoke with say the typical sentence for someone in a similar position — no criminal history, an otherwise unblemished record — would be a “blended sentence” — a year or 2 in jail, and then a year or 2 of community service.

Judge Michael Pastor made it clear when he denied Murray bail — he views the crime as extremely serious, possibly telegraphing a maximum sentence.  It’s hard to tell what Pastor will do, but almost everyone considers him a fair but stern judge.

The fact that the D.A. is asking for $100 million in restitution shows how much of a difference it makes that MJ is the victim.  The reality is  — in terms of money — Michael is worth more dead than alive, so there should be no restitution.  His 3 kids will now get hundreds of millions in a windfall.

Here’s the reality … Murray will not serve a day in prison.  Because of a new California law, any time he gets will be served in L.A. County Jail, and the amount of time will automatically be cut in half.  And, Murray would be eligible for house arrest.

Sentencing is set for 8:30 AM.  We’ll be livestreaming.