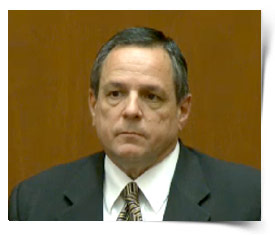 Jurors finally got to hear from the doc himself… in what’s considered one of the most important pieces of evidence in the trial.

* In the audio, Murray sounded calm and collected as detectives ask him basic information.
* The meeting — attended by Murray, his lawyer, and a second detective — was held on June 27th at a hotel in Marina del Rey.
* Murray said on he arrived at MJ’s house at 12:50 am on June 25th.
* MJ arrived at 1:05 am after his rehearsal saying he was tired and fatigued.
* Murray then rubbed a cream on his body to treat his Vitiligo.
* Murray said he gave MJ an IV in either his right or left leg, and a 10 mg Valium pill.
* MJ couldn’t sleep so Murray gave him 2 mg Lorazepam IV.

* Murray said MJ complained he wasn’t sleepy, so he gave him 2 mg of Midazolam around 2 am.
* Murray then turned down the music, and suggested meditation. He said MJ finally dozed off at around 3:15 but only for a little while.
* At 4:30 MJ said, “I have to sleep, Dr. Conrad, I have these rehearsals to perform.” Murray gave him another 2 mg of Lorazepam.
* He was still wide awake by 7:30 am. Murray decided to give him another 2 mg of Midazolam … which didn’t work either.
* At this point, MJ was begging for “Milk”. Murray says finally relented and gave the singer 25 mg of Propofol around 10:50 am.
* MJ finally fell asleep at around 11am.
*Murray told detectives he had taken all the precautions necessary … keeping oxygen and pulse monitoring nearby.
* He said the most he’d ever given MJ was 50 mg of Propofol.
* He said he gave MJ Propofol every night for 30 days, except for 3 nights when he was trying to “wean him off”.
* Murray said he was surprised at how knowledgeable MJ was about his medications.
* Murray said he was monitoring MJ long enough to feel comfortable, then went to the bathroom.
* He said he was gone for 2 minutes… when he came back, MJ he wasn’t breathing and his pulse was high. “His body was warm and there was no change in color,” Murray said. “I started immediately doing CPR and mouth-to-mouth.”
* Murray did chest compressions with one hand
* he couldn’t take him off the bed so he improvised placing his left hand under the body.
* Murray said he continued compressions with one hand while calling MJ’s assistant on his cell. He didn’t ask him to call 911 because he said he was busy giving CPR.
* Murray lifted MJ’s legs to get more blood to his heart.
* Murray went downstairs and asked Chef to get security. Security called 911.
* Murray said he couldn’t move MJ off the bed and conducted chest compressions with his left hand as he used his other hand to call MJ’s assistant Michael Amir Williams.
* Murray told detectives he ran downstairs and asked the chef to call security. “I said call 911”
* Murray said as he was caring for MJ paramedics were talking to UCLA and wanted to give up. He begged them to transfer care to him because MJ was his friend.
* He said he was in the ambulance with MJ as they transported him to UCLA
* Murray said they tried for about an hour.
* He said they the doctor at UCLA wanted to try a balloon pump to help start MJ’s heart.
* After MJ was pronounced dead, the ER doctor asked Murray what had happened. Murray told her maybe it was massive pulmonary embolism.
* Murray said he didn’t want to sign death certificate because he didn’t understand the cause of death.
* Murray insists he was trying to wean MJ off Propofol 3 days before his death.
* Murray said he started to give MJ more Lorazepam and Diazepam to bring down the Propofol.
* Two night before he died Murray says no “Milk was given” and MJ slept well. Murray  thought he was “on to something.”
* But the next night it didn’t work.