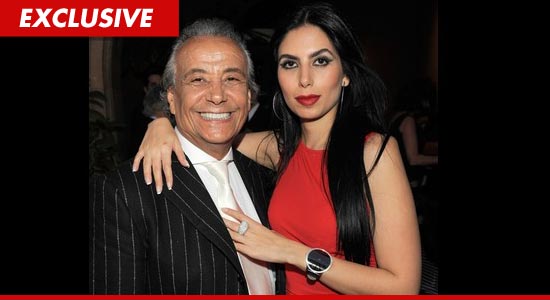 The girlfriend of Bijan — one of the most famous fashion designers in the world who died in April  — is lashing out at his children and his sister, claiming they have no right to throw her out of his Beverly Hills mansion.

Mahtab Mojab (common spelling) worked at Bijan’s wildly expensive Rodeo Drive shop since 2004.  Almost immediately, she claims the fashion mogul came on to her, telling her she was beautiful and offering to rub her tired feet.

Mojab claims in new legal docs they hooked up, and in September, 2006, she moved into his home.  Mojab — who was in her 20s at the time — claims Bijan made a contract with her … that she would take care of him, and in return he would support her and let her live in his Bev Hills home for life.

As for what she claims she did for the 67-year-old … she arranged his underwear, sox and clothes, “prepared Bijan’s hair,” and cared for him during his liposuction recovery.  And, she says, he even bragged about her to President George W. Bush.

A couple of problems:

1.  Mojab signed an agreement that specifically says she has no rights to Bijan’s property.

2.  There’s a will which does not mention her as a beneficiary.

Bijan’s kids and sister want Mojab out of the house stat, and have even tried changing the locks.

So Mojab wants a judge to put the brakes on their eviction efforts while they hash out her rights in court.