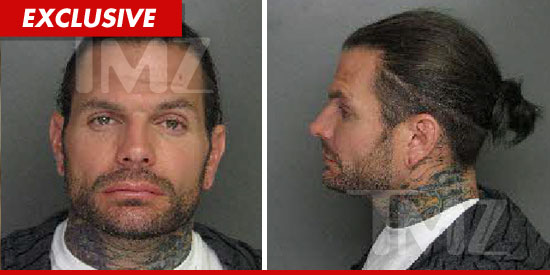 Former wrestling star Jeff Hardy has checked into a North Carolina jail to serve his 10-day sentence stemming from a drug arrest back in 2009 … TMZ has learned.

Hardy was arrested on Sept. 11, 2009 after cops say they found all sorts of drugs in his home — including opium and cocaine.

Hardy struck a deal with prosecutors … in which he agreed to plead guilty to two counts of possession of a controlled substance and one count of conspiracy to traffic in exchange for a 10 day jail sentence, 30 months of probation and a $100k fine.

Sources close to the wrestler tell us … this weekend, Jeff was adamant that he wanted to get his jail stint over with … so he decided to check in first thing Monday morning.