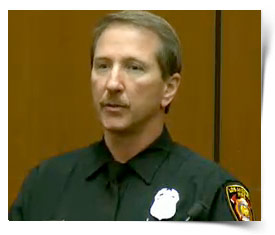 One of the paramedics who rushed to save Michael Jackson‘s life at 100 N. Carolwood Drive just testified … if Murray would have called 911 immeidately, Michael Jackson’s life might have been saved.

Richard Senneff said Murray told him he called 911 the second he realized MJ was in distress, when in fact there was a 20 minute delay.

Senneff said had Murray called earlier there was a good chance EMT’s could have restarted Michael’s heart.

Senneff said when he hooked up the EKG machine onto MJ, there was a flatlined.

* Senneff said 911 call came in at 12:22 pm. He arrived at MJ’s house 4 minutes later.
* When he walked into the room, he saw Murray, MJ and the bodyguard.
* Senneff said Michael was wearing PJs and seemed underweight.
* MJ was being moved to the floor as Senneff walked in. He said Murray was “frantic.”
* He noticed an IV stand with an IV bag hanging on it.
* He asked Murray what the patient’s underlying health condition three times before Murray said there was none.
* He said that didn’t make any sense… there was an IV stand in the room and other equipment.
* When he asked what medications he was taking, Murray told him he wasn’t take him anything… then said he did give him a little Lorazepam.