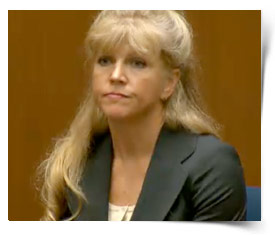 AEG attorney Kathy Jorrie just took the stand… Jorrie was the one who drafted the contract between AEG, Dr. Murray, and Michael.

* Jorrie told prosecutors Dr. Murray had issues with a part of the contract, saying he wanted to get paid his monthly $150,000 fee even while “This Is It” was on break.
* Dr. Murray also requested a CPR machine in the contract. When Jorrie asked him why would he need a CPR machine… Murray told her that given MJ’s age and the strenuous nature of the show he didn’t want to take any chances.
* Jorrie says she spoke to Murray on June 24th. Murray told her he had seen Michael perform and that he was in “perfect health.” This was a day before he died.
* She said the contract was NOT signed by all parties, and no payment was made to Murray by AEG.