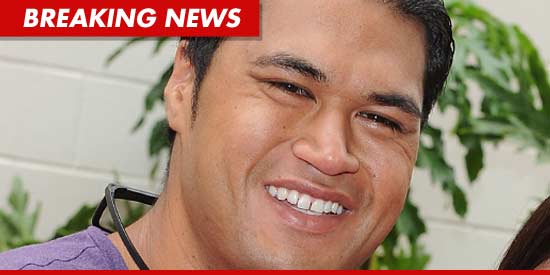 The “Biggest Loser” contestant who was seriously injured after he plummeted several stories from a building last week was trying to climb down a fire escape when he slipped and fell … this according to his fiancee.

TMZ broke the story, Season 9 competitor Sam Poueu was listed in critical condition after the Sept. 3 incident … and now fiancee Stephanie Anderson told People.com the whole thing happened because he got locked out on the roof of his friend’s apartment.

It all went down in San Francisco, as Poueu was celebrating a friend’s birthday — when he went up to the roof by himself and the door locked behind him.

Anderson says Poueu “attempted to climb down the fire escape ladder to drop down into the fourth floor balcony and slipped.”

As we first reported, Poueu suffered a pelvic injury, torn ligaments, a punctured lung, and a broken leg during the accident … but Anderson says he’s making “positive and encouraging strides” in his recovery … adding, “To date, many of his internal injuries are on the healing mend.”