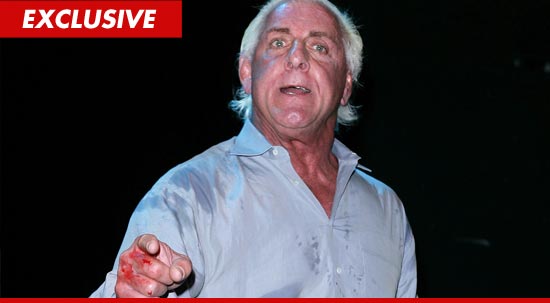 Wrestling icon Ric Flair is FURIOUS over an article which claims the Nature Boy is suffering from a serious medical condition caused by years of hardcore boozing … because Ric claims it’s NOT TRUE and now he’s threatening to sue.

The unflattering article — which paints Flair as a troubled, irresponsible mess of a person — ran on an ESPN affiliated website called Grantland.com … and the report is mostly based on court documents.

But Flair is particularly pissed about the reporter’s claim that he suffers from Alcoholic Cardiomyopathy — a disease caused by years of alcohol abuse which often leads to heart failure.

A rep for Flair — — whose real name is Richard Fliehr — tells TMZ, “While the information gleaned from courthouse records may be credible, Mr. Fliehr is currently evaluating his legal options with respect to falsehoods in the story, specifically the untrue statement that he suffers from alcoholic cardiomyopathy.”

The rep adds, “Our client understands that these allegations are part of the territory when you are not only famous, but a living legend.”