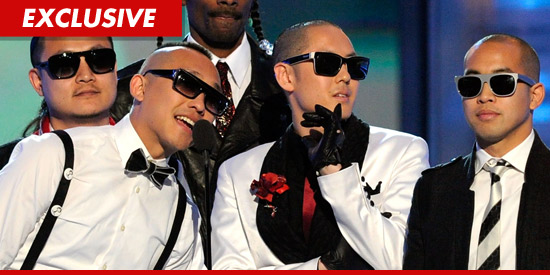 The Far East Movement probably wished they had a G6 yesterday — when their tour bus broke down in the middle of the New Mexico desert … and they had to HITCHHIKE their way back to civilization.

A rep for the band tells us the guys were traveling from Missouri to Phoenix when their bus died … stranding them 50 miles away from the nearest taxi service … which refused to send a car that far.

We’re told the band decided their only option was to try and hitchhike to Albuquerque and catch a flight to Phoenix — and fortunately for them … an angel in a Chevy Silverado came to the rescue.

After loading up their stuff in the bed and piling in the extended cab — the band hooked up their savior with $200 in cash, tickets to Lil Wayne‘s “I Am Still Music” tour and even took a picture with the woman — so she could prove the whole event to her kids.

F.E.M. got to the airport just in time for the flight — but as soon as they sat in their seats, a MASSIVE hail storm broke out — grounding the plane for hours.

But the story has a happy ending … because the band EVENTUALLY got to Phoenix — and they’re back on schedule … ready to perform in Irvine, CA tomorrow … if they actually manage to get there.