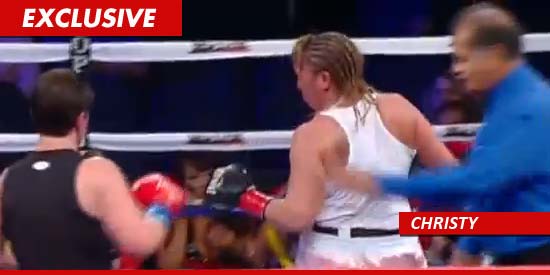 Christy Martin, the women’s Super Welterweight Boxing Champ, is taking a shot at the California State Athletic Commission, claiming the organization is sexist and she lost what would have been her 50th victory as a result.

Christy fought Dakota Stone last June at the Staples Center in L.A.  Christie was ahead in points with 51 seconds left in the fight, when the referee stopped the fight and gave the victory to Stone.

The ref felt Christy couldn’t continue because her hand was injured, but Christy’s lawyer, Gloria Allred doesn’t see it that way.  Gloria claims all Christy did was “momentarily wince,” and she wanted to continue, and the decision to stop the bout is “an unfair and sexist double standard” — i.e., a ref would never have stopped a fight under the same circumstances if the boxers were male.

It’s kind of ironic — last November, Christy’s then husband allegedly tried to murder her by stabbing her, shooting her and pistol whipping her, yet the ref stopped the bout over what Gloria says was a wimpy hand injury.

Gloria and Christy will hold a news conference on Monday at 9:30 AM PT in the Ronald Reagan State Building in L.A. to take on the Athletic Commission.

We’ll be livestreaming the news conference.