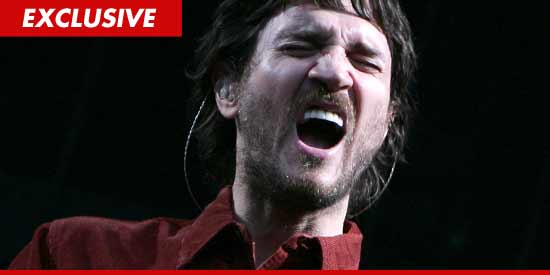 Former Red Hot Chili Peppers guitarist John Frusciante believes he’s being “stalked” by an obsessed female fan … claiming “I am worried that she is unstable and that she could snap at any moment.”

Frusciante filed the request in L.A. last week, saying a 32-year-old woman named August Elizabeth Thomas approached him in 2010 in the hopes of writing a screenplay about his life … but she wouldn’t take no for an answer.

In the docs, Frusciante claims Thomas began firing off aggressive emails and letters — described as “long, rambling and overly emotional — and in some cases, she would admit that she is ‘often drunk.'” He claims Thomas also showed up to concerts where his rocker wife Nicole Turley was performing to talk about her script.

Frusciante — who played off and on with RHCP since 1988 — says the final straw was when Thomas showed up to his home on July 28 … and AGAIN on July 29.  Frusciante explains, “I feel like I’m being stalked.”

He adds, “I fear both for my safety and for my wife’s safety. Given that my wife and I are musicians and often play at venues around the world, it is hard for us to avoid Ms. Thomas if she is free to continually show up to harass us.”

Both sides are due in court later this month. Calls and emails to Thomas were not immediately returned.