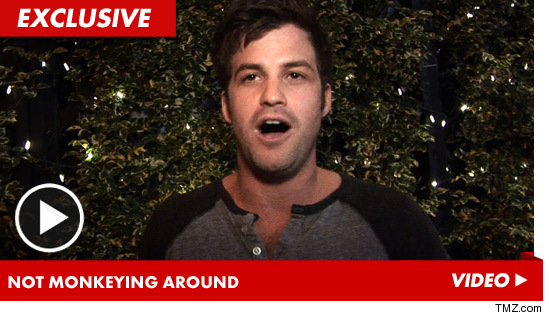 MTV reality star Johnny Devenanzio — aka Johnny Bananas — tells TMZ … he’s VERY serious about his beef with “Entourage” claiming, “I’ll be damned if some half-ass ape is gonna come and steal my identity.”

TMZ broke the story … the former “Real World” star is threatening to sue HBO over the “Johnny’s Bananas” storyline on “Entourage” — claiming he owns the rights to the name, and never gave permission for the show to use it.

Johnny was out at Beso in L.A. last night … and told us, “It’s not like I spilled hot coffee on my vagina and I’m trying to make a buck off of it … my identity has been stolen man.”

He adds, “I’ve been on television for the last 5 years, acting like a jerk-off, creating this
name, making it a household name, and I’ll be damned if some half-ass
gorilla is gonna come by and steal my thunder.”