NBC news is apparently reacting to a TMZ story, in which we said Casey Anthony‘s lawyer is negotiating with the major networks, and big bucks are on the line … because the network is saying they have not offered any payment for an INTERVIEW … BUT, it made no mention of other ways of paying handsomely for a chat with the very famous former murder defendant. 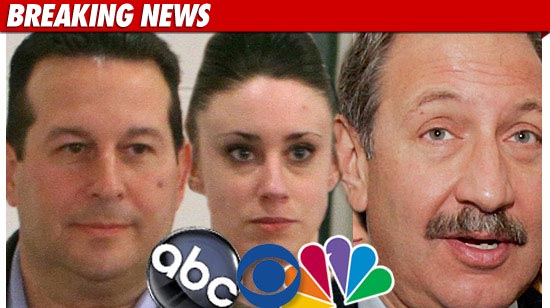 TMZ broke the story … Anthony’s lawyer, Jose Baez, was holed up at the swanky Mandarin Oriental Hotel in New York City, negotiating with NBC, ABC and CBS for the first sit-down.  And, as we reported, Baez was in the Hotel bar Thursday night, getting tips from high-profile lawyer Mark Geragos on how to negotiate the best deal.

NBC gave a statement to the New York Post, saying, “We’ve talked with Baez about getting an interview with Casey Anthony, but only under NBC News standards and conditions — no payment, and absolutely no job offers for any member of her defense team.”

Read carefully — NBC is saying “no payment,” but it refers to an “interview.”  That doesn’t cover paying huge money for pictures, video, etc.  That’s S.O.P. in the network game — and we’re told that’s one of the issues Geragos covered with Baez.

As we reported, as of Friday morning … NBC was the frontrunner in nabbing Anthony.