Marc Tyler‘s father tells TMZ … the suspended USC running back should have known better than to  joke about the university paying football players … but says he’s 100% certain Marc has NOT taken one illicit penny from the school. 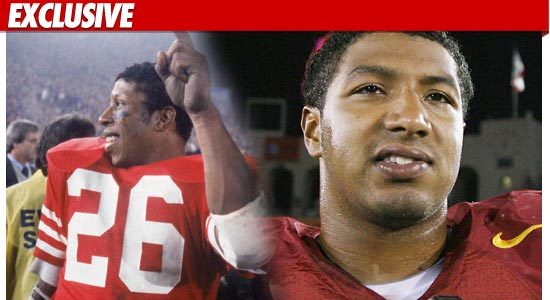 TMZ spoke with Wendell “The Truth” Tyler (pictured left) — a former NFL running back who played college ball at UCLA.

Wendell tells us, “Marc is accepting the punishment because he knows as a Christian he shouldn’t have allowed himself to get in that position … saying what he said.”

Wendell insists that  “Marc was clearly joking” … telling us the USC player still relies on his parents to cover his expenses outside of his scholarship.

“Marc is DEFINITELY not getting paid … so I don’t know what he was thinking when he said it.”