Sugar Shane Mosley has been forced to give up 3 championship belts — to his wife … in his divorce! 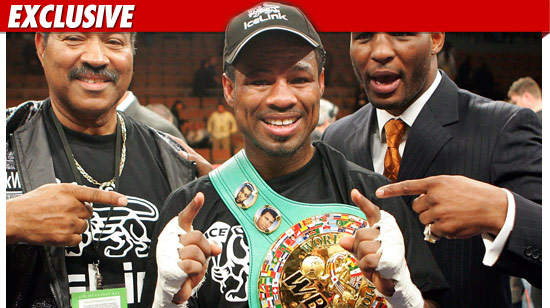 TMZ has obtained Sugar Shane’s divorce settlement documents and — if you’ve been divorced — we’re betting his is a lot different.

The settlement provides that ex-wife Jin “shall maintain custody and control of three championship belts for each of the respective parties’ three minor children.”  Each of the kids get a belt when they turn 18.

And Jin will get half of Sugar Shane’s cut of profits from videotapes and DVDs of his big fights, including bouts with Oscar De La Hoya, Miguel Cotto and Fernando Vargas.

Since the divorce was filed in California and community property rules apply, Jin gets half of Sugar Shane’s fight purses during their marriage.  But luckily for Sugar, his big fight against Manny Pacquiao was held after the couple separated, so his $3 mil is his alone.

And get this … the couple accumulated 854,410 American Express points during their marriage, and she gets half.   To put that in perspective, for Jin’s 427,205 points, she can buy either an industrial generator or a 10-speed bike.