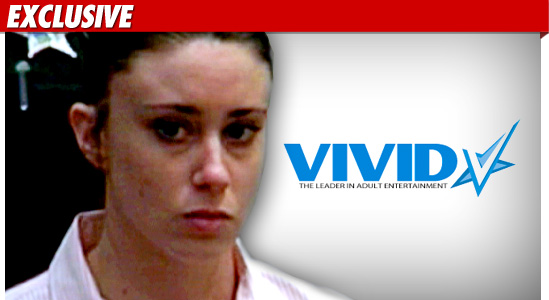 Hours after she was found not guilty of murdering her 2-year-old daughter Tuesday, Vivid Entertainment honcho Steve Hirsch called up Casey’s lawyer, Jose Baez, to discuss the possibility of a business relationship.

Hirsch tells TMZ … “Whether you agree with the verdict or not, Casey will want to move
forward with her life and has a right to make a living. It’s not going
to be easy for her and we believe we can help her make the transition
into a new life.”

No word on how much Hirsch is willing to pony up … but he thinks there’s a realistic chance … noting, “We’ve all seen the pictures of her partying and having a good time with friends where she definitely looks hot.”

So far, Hirsch has yet to hear back from Anthony’s lawyer … but he says, “I’m sure Baez and Casey are celebrating today, but I’m hoping to connect with him very soon.”