The Situation‘s dad has finally admitted that releasing those terrible videos about his son was a CRAPPY thing for a father to do … and now, he’s filed legal documents saying “I am sorry.”

TMZ has learned … Mike “The Situation” Sorrentino is dropping his lawsuit against his dad, Frank Sorrentino.  Father and son filed legal docs asking the judge to dismiss the case.  In the settlement …  Frank agrees to stop using the “Jersey Shore” star’s name, image and likeness to make a buck.

And while Frank takes some of the blame for going on camera and trashing his kid — Frank claims in the dismissal docs he’s the real victim … because he was exploited by a “con artist” named Robert Fletcher who wanted to reap the profits from the Sorrentino family feud.

Frank says Fletcher, his former publishing agent, was the driving force behind the website — and concocted the plan to illegally exploit Mike’s name and image.

UPDATE:  We’ve learned there was a financial component to the settlement. We’re told although the Situation’s dad didn’t have to pay any money, Fletcher had to cough up $5,000.  Better than nothing.

In the docs, Frank says, “I regret getting involved with Robert Fletcher and I am sorry that I participated, to the detriment of my son Michael.”

Frank says his anti-Situation website has already been shut down and he’s willing to testify against Fletcher in court if need be. 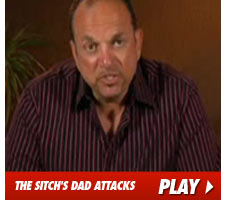