TMZ has learned Maria Shriver has pulled the trigger on her marriage … she just filed for divorce from Arnold Schwarzenegger … and we’ve learned, there is NO PRENUP. 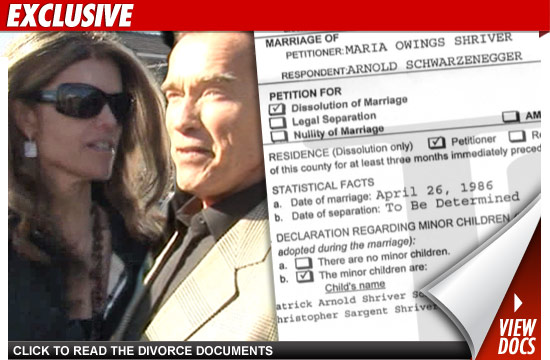 In the divorce petition, obtained by TMZ, Shriver cites “irreconcilable differences” as her reason for ending the 25-year marriage.

Shriver is asking for spousal support and wants the judge to deny Arnold the right to ask for support for himself– though it’s highly unlikely he would.

And, in the petition, filed by disso-queen Laura Wasser, Shriver is asking Arnold to pay the attorneys’ fees of both parties.

As for the date Arnold and Maria separated … it isn’t specified in the divorce papers.

According to the docs, the property accumulated during the marriage will be divided at a later date.  And, sources tell TMZ, there is no prenup, so all of Arnold and Maria’s earnings over the past quarter century will be divided 50/50.

Sources close to the couple tell TMZ …  Arnold and Maria are on speaking terms and Arnold knew beforehand that she was filing divorce papers. Maria is telling friends she hopes this will be an easy and amicable divorce.

GOOD! I Hope she takes the pig to the cleaners!

Kinda sad. He pretty much came out of nowhere and practically begged her to marry him. Then after they marry, he cheats on her for decades with many women. Greedy sc*mbag forgot to count his blessings. Same story, different rich guy.