Lil Wayne‘s baby mama #4 — R&B singer Nivea — was busted for DUI in Atlanta this weekend … after she SLAMMED into a tree, with a kid in the car … and TMZ has obtained her mug shot. 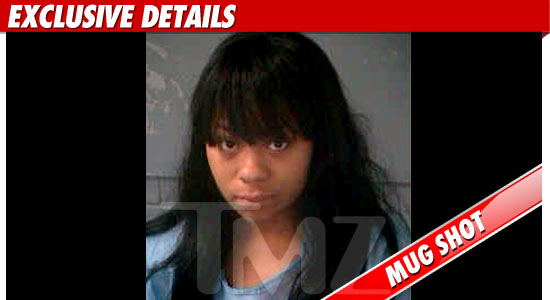 The drama began after Nivea left a nearby wedding reception for her friend Toya Carter (Lil Wayne baby mama #1) … where she also hung out with Lauren London (L.W.B.M. #3).

According to law enforcement sources … Nivea was on the road around 1:30 AM on Sunday when she plowed her ’06 Mercedes right into a tree that had fallen into the road during a recent storm.

We’re told when cops arrived at the scene, Nivea had “bloodshot, glassy eyes and smelled like alcohol.” Nivea told police she only had 3 drinks earlier in the evening … and didn’t see the bright yellow crime tape and the traffic cones directing cars away from the downed tree.

Nivea was eventually arrested on suspicion of drunk driving and reckless driving. We’re told the child in the car was not injured and was released to Nivea’s boyfriend.

As for Nivea — sources close to the family are adamant she was NOT drunk, or speeding, at the time of the accident.